A number of young Vietnamese joined a green tour on Saturday to Dong Nai Province, which neighbors Ho Chi Minh City, as one of GetGreen Vietnam’s activities to promote a green lifestyle and sustainable consumption. The group went to Kingfisher Nest Tourism Complex in Vinh Cuu District.

GetGreen Vietnam is a project promoting sustainable consumption in the country which focuses on sustainable living and working for middle-income consumers in urban areas, according to its website.

Like its sister project SPIN (Sustainable Product Innovation), GetGreen Vietnam is also co-funded by the SWITCH-Asia Program of the European Union and implemented by the Netherlands’ Delft University of Technology, Vietnam Cleaner Production Center, and the Asian Institute of Technology in Vietnam.

The project is aimed at developing consumption groups which are aged from 18 to 45 and include students or office workers in a sustainable consumer community and at launching campaigns to promote environmental protection and combat climate change.

The project costs a total of €1.4 million, of which 80 percent is funded by the SWITCH-Asia Program of the European Union, and 20 percent comes as corresponding funds from the project’s partners, its website added.

Its implementation time is three years from April 2012.

The activities aim to bring about changes among the members’ behavior and lifestyle before they themselves help change others.

Late last month, the members had enjoyable, beneficial urban farming experiences at Saigon Garden, which is located on the rooftop of the Saigontourist Hotel in Tan Binh District, Ho Chi Minh City. 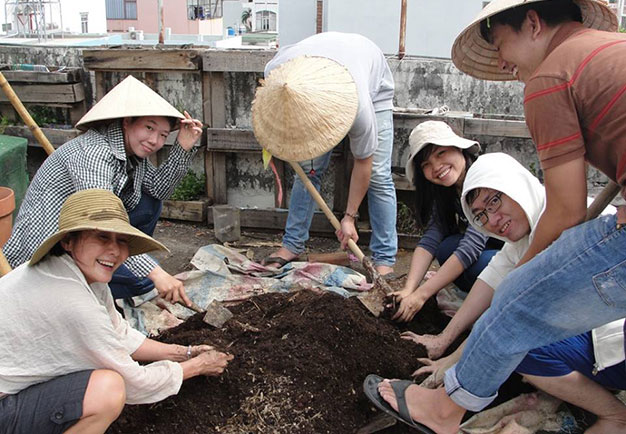 Young members of the GetGreen Vietnam project are seen getting dirty in an “urban farming” activity held in Ho Chi Minh City on November 29, 2014 to help promote a green lifestyle.

Apart from seeing for themselves organic planting methods, the youths also adopted the model at their own homes.

Nguyen Le Toan, who loves gardening, shared the experiences taught him how to safely grow aromatic herbs and fruits on his home’s terrace.

They also took great delight in learning how to process food leftovers, such as turning remaining rice into mouth-watering fried rice, or leftover chunks of chicken into sizzling porridge.

“Discarded leftovers account for up to 30 percent of the total amount of food which we buy and spend time processing, while we can easily make use of them,” the members said.

They also learn to make the best of natural, environmentally- and people-friendly detergents such as lemons, salt and coconut oil to wipe out stains instead of using conventional chemical products.

The members are also interested in whether turning off their bike engine while waiting for red lights to turn green is beneficial regarding energy conservation and emission cut, among other various traffic issues.

Nguyen My, director of MMSoft, said she will coordinate with the social network “Song Xanh” to build a green corporate culture and lifestyle.

MMSoft is an IT consulting company where several of GetGreen Vietnam’s sessions were held.

Bui Viet Ha, chair of “Song Xanh,” revealed that after the GetGreen Vietnam project ends in April 2015, his social network will continue what the project is doing now.